Ah, the right to vote!  Just dandy… I can’t wait for Election Day to get here so I don’t have to read about all the insane campaign melodramatics.  Trying to stay informed with the smearing in every article has gotten tedious and downright foolish.  It’s as if I’m reading the chronicles of mudslinging on an elementary school playground.

One of the rights you have as a citizen of the United States of America is the right to vote.  However, the irony is we have the right to vote, and there are those who are determined and have minds made up not to vote.   You’re a citizen, and you should, therefore, take part in the process.  Stop neglecting your right to vote.  It’s also a responsibility we have to the future of our country and to the current generation.

I get it.  Personally, I would like a campaign year do-over.  It has been one wild and crazy ride.

I find myself with an overwhelming responsibility as a Christian to get out and vote.  I’m not so much voting for the person, but I’m looking at the platform.  In other words, if you cannot decide who to vote for, then the question is “Which platform best reflects your morals and ethics,” or if you’re a Christian, “Which platform best reflects Biblical beliefs and lines up with Godly morality.”

I’m not foolish to believe everyone lives by the morals and ethics I live by which is why I have thought about both questions.  Yes, we can protest.  Yes, we can shout and scream.  Is it realistic for you to believe your vote does not count?  Is it realistic for you to believe as a citizen of the USA that it’s not your responsibility to vote?  IF YOU DON’T VOTE, OTHERS ARE VOTING TO ELECT SOMEONE WHO WILL GOVERN THIS NATION WITHOUT YOUR SAY (YOUR VOTE) IN THE MATTER.  Do you really want others choosing for you?  Because if you don’t vote, you’ve basically handed over your say to someone else by not going to the polls and voting.  If you are able bodied and not bothering to vote come this November, in my opinion, that’s being lazy and shirking your responsibility. Even USA citizens overseas have gone through the trouble of obtaining their absentee ballots and are sending in their absentee ballots in order to have a say in who gets elected as well as exercising their right to vote.

Educate yourself on the Democratic Platform, Republican Platform, and the Libertarian Platform.  Do the research. 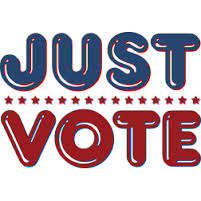 Get all the information you can, make a decision, and go vote on November 8, 2016.

Don’t let others speak for you.

Let your voice be heard through your vote.

The only thing that keeps you from moving forward is you.

Get out of your own way, and take a chance.

Write your little heart out.  Blog your little heart out.  Speak your mind, and freely speechify or grandstand as much as you want.  Don’t hold back.  Just remember  words uttered without thought to your fellow man or woman, in other words without an ounce of consideration or courtesy, will be held against you no matter whom you are addressing and by those who are merely spectators.

Freedom of speech does not allow for us to scream “FIRE!” in a crowded theater scaring the living daylights out of everyone to the point where they are stampeding out the door.  Freedom of speech does not allow for us to breathe death threats or threats of bodily harm to another.  In both those cases, consequences are sure to follow.  Admittedly though, people have the freedom to act as stupidly as they want because it’s a free country.  They should know they need to own the garbage they created and now have to pay the consequences.  Consequences are not something we choose.  Consequences happen.

It’s always good to refresh your mind on what your rights are as a citizen.  So I got this quote from the site http://www.usconstitution.net:  “Amendment I FREEDOM OF RELIGION, SPEECH, PRESS, ASSEMBLY, AND PETITION.  Passed by Congress September 25, 1789. Ratified December 15, 1791.  The first 10 amendments form the Bill of Rights.  Congress shall make no law respecting an establishment of religion, or prohibiting the free exercise thereof; or abridging the freedom of speech, or of the press; or the right of the people peaceably to assemble, and to petition the Government for redress of grievances…”

…but Political rallies bring out the worst in people.  I get it.  All of us are passionate about what we so strongly believe as individuals, what we consider important and moral, concerned how whatever happens affects us and our families, the communities we live in.  The reality is though there will always be disagreements and lack of unity.  And there is only one race: the human race; but I digress.

People make choices as to what they say or how they’ll react.  <> I had a pastor who taught me never make decisions in the heat of emotion, and refrain from speaking in the heat of emotion.  He taught me to step back immediately, to wait until calmed down, and then THINK about what to say or what to do.  Yeah, admittedly, I have not always taken to that wise advice even though there are times I do.

Peaceful assembly?…  How can an assembly be peaceful when speeches (words spoken) incite violence?  I would like to believe the ones making the speeches would consider their words carefully before spouting them.  How is the crowd going to react?  But then again, those protesting also use words.  The responsibility of words falls upon anyone who speaks.  “If I say this, will it incite violence?”  “Do my words convey hope?”   “Am I going to regret these words later on?”  “Should I calm down before I say what I can’t take back?”  “If I say these words, is there a possibility I could end up in a full body cast or end up dead?”  “If what I say infuriates the person and that person responds with an attack, will I end up retaliating or do I just keep my mouth shut?”

so the madness can end.

Much love to all, Diamond In The Rough